Orlando, 91, of Hillside, NJ passed away January 29, 2017. A mass of Christian burial will take place on Wednesday, February 1, 2017 at Christ of King Church, 411 Rutgers Street, Hillside, NJ at 10am. The family will receive their friends at McCracken Funeral Home, 1500 Morris Ave, Union, NJ; on Tuesday, January 31, 2017 from 4-8pm.
Born in Newark, George moved to Hillside in 1959. As career firefighter, he was a rank captain and spent most of his career at Engine Company 10. He was with the department for 34 years. As a veteran of WWII, he obtained the rank of Staff Sergeant while serving in the European Theater. George is also a member of the FMBA, Newark Fire Officers, Fireman’s post 1851 VFW the NJ Exempt Fireman’s Assoc and the Elks Lodge 1583 in Union. After retirement George divided his time between Hillside, NJ and Boca Raton, FL. Beloved husband of 69 years to Marion (nee Monaco). Devoted father to George J. and his wife Karen, Linda and her husband Joseph DeCosta. Adoring grandfather to Christina DeCosta and Joseph and Nicholas Orlando.

Grace O. RAUSCHER  (nee Orlando) January 6, 2017, age 94, beloved wife of the late Robert W. Rauscher; devoted mother of Barbara Rauscher, Joseph (Mary) Rauscher and James (Kathleen) Rauscher; loving grandmother of seven grandchildren and four greatgrandchildren; dear sister of George Orlando and the late Mildred Piccioli, Marie Cameron, Helen Gohr, Frances Parrino and Joseph Orlando; also survived by many nieces and nephews. No prior visitation. Prayers will be said on Tuesday morning at 8:45 AM at the Urban Amigone Funeral Home (http://www.amigone.com/) 3645 Genesee St. followed by a Mass of Christian Burial celebrated from the Chapel of Our Lady Help of Christians Church at 9:30 AM. Family and friends invited. In lieu of flowers, memorials may be made to the Carmelite Monastery, 75 Carmel Rd., Buffalo, NY 14214.

He married Evangeline (Angie) Wiedemeier on October 19, 1940. They worked Through out Wisconsin Building Distribution Power Lines. During the winter months he was a butcher. Louis bulldozed with his brother Richard, truck driver hauling pulp wood in Michigan. In 1948 Louis started Orlando Construction. He worked in North & South Dakota for government building H frames lines. After retiring at the age of 70 he once again stared his own business selling tools until age 88. Louis enjoyed time with his family. Relaxing at home watching T.V. going out to eat with family & friends.

The entries are in Latin and will need to be translated to Sicilian as identified below. Any differences in spelling  is due to how the name appears in the sentence of the record.

The babies were all baptised the same day as they were born.

29 May 1891 Salvator, son born to Francisco NUCRIO, son of Salvatoris and Francisca DIRETO, daughter of Nautii. Godparents were Joseph LOBUE son of Paschalis and Carmela ORLANDO, a married couple. (page 519/187)

12 July 1891 Jacobus, son born to Cyro LEONE, son of Petri and Anna ORLANDO, daughter of Jacobi. Godparents were Petrus VALLONE son of Josephi who was unmarried. There is a Matrim Contrx dated 7 Jan 1915 which shows he married Nicolina LOBUE. (page 526/224)

The 12th Census in the Netherlands took place on 31st May 1947.  You can search the Database of Surnames HERE

By contrast here is the distribution map for 2007, which has shown some growth in occurrences of the surname from 3 in 1947 to 18 in 2007. A visit to the website will enable you to identify the areas where the surname appears 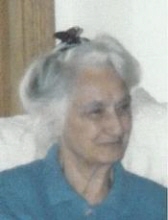 Josephine was born Oct. 3, 1918 in Crivitz to the late Anthony and Mary Orlando. Josephine lived and worked in California for 35 years. Upon retiring she moved back to Wisconsin and settled in Green Bay where she had many wonderful friends.

He was born June 16, 1927 to the late Tony and Mary (Porfilio) Orlando in the Town of Stephenson. In 1950 he married the former Sharon Meyer in Chilton and she preceded him in death in 1999. He then married Marie (Johnson) Ricter in 2000. October of 1945 he served in the Army during WWII. John farmed in the Town of Stephenson and moved to Chilton in 1971 and was employed by the Town of Charlestown until retirement and moving to Crivitz where he was employed by Wausaukee Club for seasonal work. He loved spending time with family and fellowship with the Church friends. He was known as “Grandpa O” or “Grandpa John”

Interment will be in Forest Home Cemetery in Athelstane.

Albina Jane (Orlando) Logan, 88, of Pawcatuck, passed away June 10, 2015. She was affectionately referred to as Ma Logan and Gramma Bean. Albina was the daughter of the late Anthony and Victoria Orlando, formerly of Stonington.

Albina worked as a secretary at Stonington High School shortly after graduating. While raising eight children, she played a supporting role in the early development of Ortronics Inc. where she worked alongside her brother, Maurice Orlando. She then went on to be a bookkeeper in various Summit Nursing Homes until her retirement.

A lifelong resident of the area, Albina was a charter member of the Rhode Island Beach Buggy Association now known as RIMS. It was not uncommon for her to pile her kids in the back of the beach buggy and fish the night away.

Another of her great loves was walking the shores of Charlestown Pond with her good friend Mary Hines. Cigarettes tucked in the top of their bathing suits and a bushel basket in tow to hold the crabs they would catch. Later they would stay up until the wee hours of the morning feasting on the fruits of their labor.

Always the Renaissance woman, Albina invested much time researching holistic practices often mesmerizing her doctors with her knowledge of alternative medicines. She instilled in her children an entrepreneurial spirit that continues on in them today. She enjoyed playing the slots and was an avid Red Sox, UCONN and New England Patriots fan to the end.

A kind and caring person, she will be greatly missed by all that knew her. The family would like thank Sandra Logan, who greatly extended Albina’s quality and length of life through her selfless, unending attention to their mother’s care.

A wake will be held on Monday from 4-7 p.m. at Gaffney-Dolan Funeral Home, 59 Spruce St., Westerly. A Mass of Christian Burial will be celebrated at St. Mary’s Church, 95 Main St., Stonington on Tuesday at 10 a.m. There is no procession to the church. Donations to St. Michael Church Building Fund, 60 Liberty St., Pawcatuck, CT 06379 or the . For online condolences, please visit www.gaffneydolanfuneralhome.com

There are some familiar faces scheduled and in many instances I need to go to bed very late if I am to hear the webinars! – there is an eight-hour time difference between Pacific time and GMT.

My buddy Tessa Keough is scheduled for 17 August 2016 with What’s in a Name? Every Surname tells a Story.

Despite Tessa and I being buddies, we knew each of us had submitted proposal, but didn’t know what! They are though very different presentations and I hope some of you will join us! 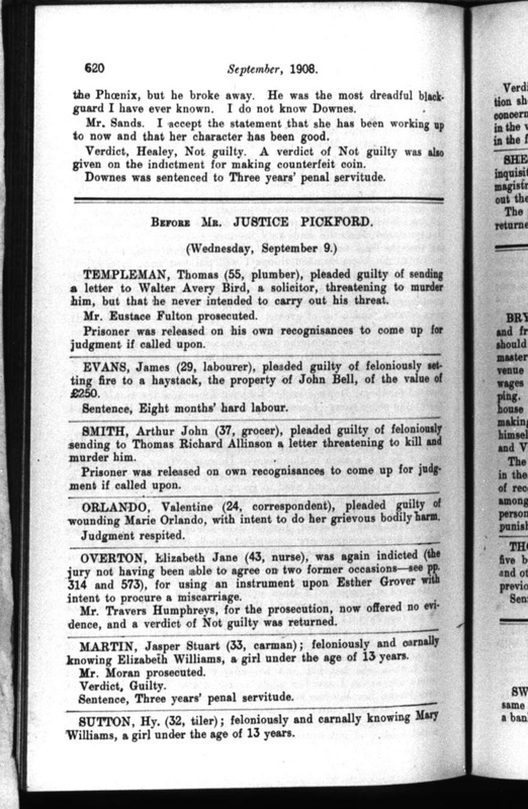 ORLANDO, Valentino (24, correspondent), who pleaded guilty last Sessions before Mr. Justice Pickford (see page 620) of wounding his wife Marie Orlando with intent to do her grievous bodily harm, was brought up for judgment

Mr. Justice Bigham said he understood that prisoner had cast off the foolish suspicions he had entertained against his wife, that his wife wanted to rejoin him, and that they had decided to return together to their native country, Switzerland. In these circumstances he (Mr. Justice Bigham), with the full concurrence of Mr. Justice Pickford, had decided to release prisoner on his own recognisances in the sum of £100 to come up for judgment if called upon.