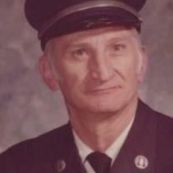 Orlando, 91, of Hillside, NJ passed away January 29, 2017. A mass of Christian burial will take place on Wednesday, February 1, 2017 at Christ of King Church, 411 Rutgers Street, Hillside, NJ at 10am. The family will receive their friends at McCracken Funeral Home, 1500 Morris Ave, Union, NJ; on Tuesday, January 31, 2017 from 4-8pm.
Born in Newark, George moved to Hillside in 1959. As career firefighter, he was a rank captain and spent most of his career at Engine Company 10. He was with the department for 34 years. As a veteran of WWII, he obtained the rank of Staff Sergeant while serving in the European Theater. George is also a member of the FMBA, Newark Fire Officers, Fireman’s post 1851 VFW the NJ Exempt Fireman’s Assoc and the Elks Lodge 1583 in Union. After retirement George divided his time between Hillside, NJ and Boca Raton, FL. Beloved husband of 69 years to Marion (nee Monaco). Devoted father to George J. and his wife Karen, Linda and her husband Joseph DeCosta. Adoring grandfather to Christina DeCosta and Joseph and Nicholas Orlando.